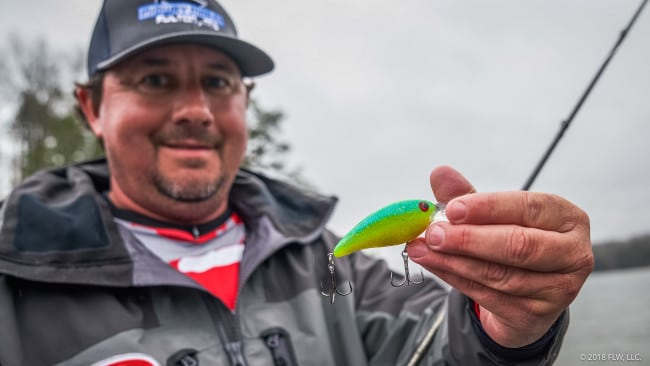 The best baits are tricky to pin-point. Whether pros ventured to the clear water below Brown’s Bridge or stayed in the stained waters of the rivers, almost all the top ten anglers at the FLW Tour event presented Ranger on Lake Lanier utilized similar techniques and even similar lures.

Bradley Hallman changed patterns on a daily basis, from tossing a Megabass Vision 110 +1 jerkbait on points to swimming a swimbait on a ½-ounce head along marina walls to skipping a Zoom Trick Worm on a shaky head under shallow docks and walkways to tossing a spinnerbait up the river on the final day.

Zack Birge crawled a Tennessee Shad-colored YUM Pulse Swimbait on a ¼-ounce jig along six key points between Brown’s Bridge and about where the two rivers meet.

Local Jason Johnson fished “painfully slow” with a weightless green pumpkin or natural shad-colored Zoom Fluke Stick to catch suspended fish and the same Fluke Stick on a ½-ounce Carolina rig along isolated areas spotted bass like to stage on before spawning.

Braxton Setzer targeted fish hanging on the sides of long-running points by tossing a Ned Rig with a Nichols Clent’s Toadstool Jig Head up on top, or vertically fishing the same Ned rig or a wacky-rigged Yamamoto Senko to ones he saw on his graph.

Jeff Gustafson made consecutive top 10s by pitching a new Jackall Ned Rig worm called the Dew Worm on a 1/5-ounce head ahead of the boat or vertically dropping down a nail-weighted 5-inch Northland Tackle Dipstick.

David Williams sacked up a quick limit of spots every morning tossing a  MegaBass Vision 110 jerkbait along riprap walls and pitching a Queen Tackle Hammerhead jig with a  Zoom Z-Craw trailer under walkways. He then targeted largemouths with homemade spinnerbaits in the backs of pockets.

Austin Felix utilized a Keitech 3.3 Swing Impact FAT  on a ¼-ounce head multiple ways, swimming it for schoolers in the morning and then crawling it along bottom on structures 30-40 feet deep.

Chasin’ the Sun – Island of Travis