Modern four-stroke outboards have fly-by-wire controls and onboard sensors that maximize performance and efficiency. But, the 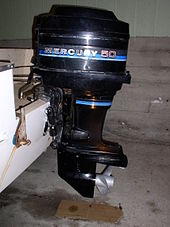 four-stroke solution is not the singular fix ideal for repowering all boats. Let’s discuss.

The first generation of four-strokes were all very heavy. All of the extra parts, such as oil sumps and valve trains, increased the engines’ mass and weight. For example, the Yamaha F200/F225 four-strokes weighed more than 600 pounds (and they still do today at 608 pounds). A 200 hp two-stroke engine from that time was closer to 425 pounds.

In 2017 almost any brand of 200 hp V-6 costs upwards of $20,000 installed. While it doesn’t burn expensive two-stroke outboard oil, it does require additional maintenance, such as oil changes every 100 hours of use and valve adjustments at every 300 to 400 hours. Plus, four-strokes that deadhead half of their cylinders with every turn of the crankshaft need more cylinder mass to compete with the prop-shaft sea horses generated by two-stroke power plants that are firing all of their cylinders with every rotation of the crank. When repowering a newer boat, choosing a four-stroke repower is probably nothing to worry about. But when considering a new outboard for an older, pre-2002 vessel, there is a concern regarding which solution will work best. These boats likely weren’t designed with the requisite buoyancy at back that is needed to keep cockpit scuppers above the waterline with added weight on the transom.

If two-stroke is your only option due to either weight or mass, Evinrude E-TEC and Mercury OptiMax two-stroke direct-injection V-6s should do the trick. You will need to purchase two-stroke oil in bulk which adds to operating costs. But, you will never have to do an oil change, change out an oil filter or adjust valves, which will help you save on operating costs.

Additionally, four-strokes are getting lighter, which should help when repowering an older boat. Yamaha has a newer in-line 2.8-liter F200 that weighs in at 487 pounds, which is actually lighter than a two-stroke 3.0-liter V-6 OptiMax. As another option, Merc has its own next-gen four-stroke, a 150 hp. Weighing 465 pounds, it’s an in-line-4 with a 3.0-liter block that has room to grow. Its valves never need adjustment, which will help lower operating costs.

You may need to focus on outboards in the 225-300 hp range. Yamaha’s Offshore series (225, 250, 300 hp) provides the power and torque of a 4.2 liter V-6 block but lowers the overall weight to 562 pounds. This is achievable by taking out the six-pack of steel-cylinder liners, which opened up the bore volume, which was then plasma-infused to provide a super-slick surface to reduce piston-ring friction. These new lightweight four-stroke outboards in single, double and triple configurations are all practical options for both new and older boats.

For the original article and more boating articles, visit www.boatingmag.com

Prepping for Boat Season: What You Need to Know About Boat Insurance

Top 10 Nature Webcams for Your Quarantainment

On the Water Menu