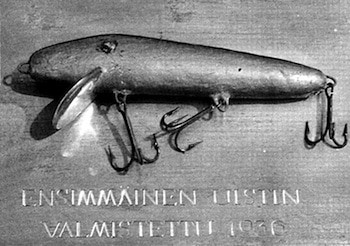 Each of the following legendary lures has changed the way we fish forever. And the stories of the men and women who created those lures show the amazing foresight, inventiveness and entrepreneurship of those who gave us fish-catching tools still used by millions of anglers today.

In the late 1940s, Nick Creme, an avid angler from Akron, Ohio, was working on an idea that would change bass fishing forever. Back then, many bass anglers fished with live night crawlers. But digging worms took time away from fishing, and bait often ran out just when fish started biting.

Creme thought he could solve those problems by inventing a realistic artificial worm. So, with his wife, Cosma, he began experimenting.

A breakthrough came when a DuPont lab tech gave Creme some plastic compounds to test. Nick and Cosma cooked them on their kitchen stove with added pigments and oils, then poured the mixture into a mold made from a real night crawler. After months of trial and error, they produced an artificial worm that felt soft and alive — and so 1949 was the birth year of the Wiggle Worm.

When Nick was satisfied his lure would catch bass, he ran an ad in Sports Afield to sell it. The Wiggle Worm came rigged with a three-hook harness. Customers also could buy packs of five replacement worms without hooks.

Early sales were modest, but they soared when a friend of Nick’s showed the worms in action in a sports-show aquarium. Show guests bought 9,600 five-worm packs for $1 each. Demand skyrocketed, and the worm business quickly outgrew Cosma’s kitchen. The Cremes set up a manufacturing plant in Akron but still had trouble filling orders. In the late 1950s, they moved the company to a larger plant in Tyler, Texas, where hardcore bass anglers fell in love with the new lures.

One of those anglers, whose name is now forgotten, was looking for ways to catch bass in thick cover in Lake Tyler. He took a Wiggle Worm and devised what we now call the Texas rig. This rig could slide through brush piles without snagging, and bass couldn’t resist. Its development further enhanced the popularity of Creme worms.

The Wiggle Worm eventually morphed into hundreds of soft-plastic lures in all colors, shapes and sizes, with two things in common: they all catch fish, and all have an ancestral link to Nick Creme.

We might not be fishing with spoons today were it not for an accident that happened while young Julio T. Buel was fishing on Vermont’s Lake Bomoseen in 1834. Julio was eating lunch while his boat drifted, and when the boat bumped a rock, he dropped his silver dinner spoon into the water.

As he watched the utensil twist and turn toward the bottom, a large fish grabbed it and swam away. Julio, who longed to catch one of the lake’s big brown trout, hurried home and “borrowed” another of his mother’s spoons. He sawed off the handle, soldered a hook to the concave side and tied his fishing line to a hole drilled in the handle stub.

When he returned to the lake, he pulled the spoon behind the boat and soon got a strike. It was the big trout he’d been hoping for, and, later that day, he caught another. Julio rode a horse down the streets of Castleton to show off his catch. When people learned he’d caught the big fish on his spoon lure, they wanted one, too.

Capitalizing on this, he made dies to craft blades from nickel-silver, painted the convex side red and added treble hooks and feathers. At first, he only sold a few. But that changed when Julio sent some of his lures to sports writer Frank Forester.

Forester was impressed with how well they caught fish and wrote about them in his book “Warwick Woodlands.” The result was a prodigious interest in Julio’s invention. In 1848, he started making fishing lures full time. He obtained his first patent four years later.

Julio’s business was hugely successful. He developed several other lures and earned a medal for his contributions to sportfishing, presented to him at Philadelphia’s Centennial Celebration in 1876. Unfortunately, in 1885, ill health forced Julio to sell his business. The company changed hands several times until purchased by Eppinger Manufacturing in 1967.

Eppinger continues selling the “Buel Spinner” line of spoons today, a tribute to the inventive man who changed the way we fish.

Lauri Rapala was a very attentive fisherman. As he rowed around Finland’s Lake Paijanne in the 1930s, he made a basic yet profound observation: Big fish eat little fish, especially injured baitfish that swim crazily about. He figured if he could make a lure imitating that wounded-minnow action, he could catch more fish.

So he started whittling some cork, and in 1936, he created an artificial minnow that wobbled just right. Tinfoil from chocolate bars formed the lure’s outer surface. Melted photographic negatives gave a protective coating. He later hit on the idea of using light balsa wood for the plugs’ bodies, something that made his lures different from all others.

Legend has it Lauri sometimes caught 600 pounds of fish a day with those lures. And as people learned of his astounding catches, the lures’ reputation grew. Lauri’s homemade plugs were forefathers to one of the best-selling lures the world has ever seen: The Original Floating Rapala.

Word of Lauri’s “wooden fish” spread throughout Finland. He soon had people from two villages making his plugs and started shipping the lures to other countries. Some wound up in Minnesota and Wisconsin, where many Finnish immigrants lived. They caught many fish on his lure but kept it secret for many years. Then, in 1959, two Minneapolis anglers, Ray Ostrom and Ron Weber, discovered the plug.

They saw the Rapala’s great potential and formed a partnership — the Normark Corporation — to sell the plug in North America. Sales skyrocketed when an article titled “A Lure Fish Can’t Pass Up” appeared in a 1962 Life magazine. Rapalas were in such short supply for a while that eager anglers gladly paid $10 for one plug. Some were actually advertised for rent at $5 per day!

Today Rapala is the world’s leading brand of fishing lures. The company manufactures 20 million lures annually at plants in Finland, France, Ireland, Estonia and China. Each is individually hand-tuned and tank-tested for perfect swimming action, just as Lauri did it.

It seems strange that it is so difficult to find information about Andre Meulnart, for like Creme, Buel and Rapala, his inventive mind gave us a fishing lure — the inline spinner — that is found in the tackle boxes of anglers worldwide.

What we do know is this: Meulnart lived in Paris in the early 1900s where he was an engineer for car-maker Peugeot. He loved fishing, and in the 1930s, he started creating new fishing lures and reels.

To market them, he created the company we now call Mepps, an acronym for Manufacturier D’Engins de Precision pour Peches Sportives, or, roughly, manufacturer of precision sport-fishing equipment.

In 1938, Meulnart patented a lure with a Swedish steel shaft around which revolved a blade of brass and colorful beads. On one end was a single treble hook. He named the lure the Aglia, the Latin name for a European moth, because of the way it fluttered through the water.

The Aglia sold fairly well in Europe and found its way to America in the hands of World War II soldiers. In 1951, Todd Sheldon, a Wisconsin tackle store owner, received one from a friend who had served in the conflict.

After catching four big trout on it, Sheldon decided to stock the lures. Soon, other fishermen were experiencing similar catches, and as the Mepps reputation grew, so did sales. By 1960, sales of Mepps spinners in the United States had topped half a million, and sales continued growing rapidly. More than 200 million Mepps spinners have sold in the U.S. alone since 1960.

And the number of Mepps spinner combinations now available exceeds 6,000. No doubt Andre Meulnart would be proud to know that his creation changed the way we fish and has provided endless enjoyment to anglers throughout the world. It takes years from the time a lure is invented until it becomes clear that it is a lure that has changed fishing.

Quite possibly the next “lure that changed fishing” has already been invented. One thing is for sure: Anglers never stop thinking of ways to catch more fish, and new ways to do that better.

Chasin’ the Sun – Island of Travis