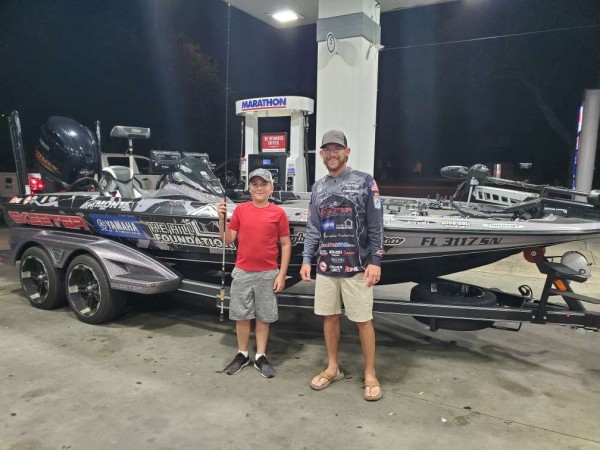 Kyle Monti, Bassmaster Elite Series pro, was in Eufaula, Alabama for the DEWALT Bassmaster Elite at Lake Eufaula, when he pulled into a convenience store around 4 AM to grab some ice for his upcoming day of fishing. Little did he know, what happened next left an impression on a young angler.

10-year-old Gabriel was in the convenient store with his father when Monti walked in and he was immediately starstruck, but shy. After Monti broke the ice with some small talk, Gabriel asked for Monti to autograph his hat.

With no pen to sign his hat, Monti recalled that, “Gabriel was shy at first but opened up when we started talking about fishing. I felt really bad that I couldn’t give him something to remember our visit. I thought that maybe he would remember a new rod more than an autograph or a hat.”

With that thought, Monti went back to his truck and selected a brand-new Denali Lithium 6-foot, 10-inch Medium/Heavy Spinnerbait Rod, thinking it was the perfect size for young Gabriel.

That day, Gabriel and his father went out to the lake and watched Monti compete, where Monti gave Gabriel a shout-out while being interviewed for Bassmaster LIVE.

What happened next punctuates the good of this story and the impact the Elite Series pros have on young anglers. Proudly, Gabriel showed Monti the picture of his personal best – a largemouth weighing 7 pounds, 15 ounces, caught on the rod Monti had given to him earlier.

“I couldn’t believe it,” said Monti, who finished the event in 15th place. “The kid caught a bass heavier than any of us did after four days of fishing on Lake Eufaula.” Just for comparison, Chris Zaldain caught the Phoenix Boats Big Bass of the tournament weighing 7-5.