Rods and reels get left behind when the Chasin’ the Sun crew gets an old school, hands-on lesson in harvesting stone crab claws – one of the area’s most prized delicacies.

Capt. Justin Leake and Capt. Travis Holeman are rookie crabbers, so they enlist the help of Justin Buxton, local restaurateur and stone crab aficionado. It’s late October, just a week into the season, and he has scouted out a few spots where crabs are likely to be hiding. Areas where the tide flushes onto shallow, grassy flats with white sand bottoms are ideal habitat. 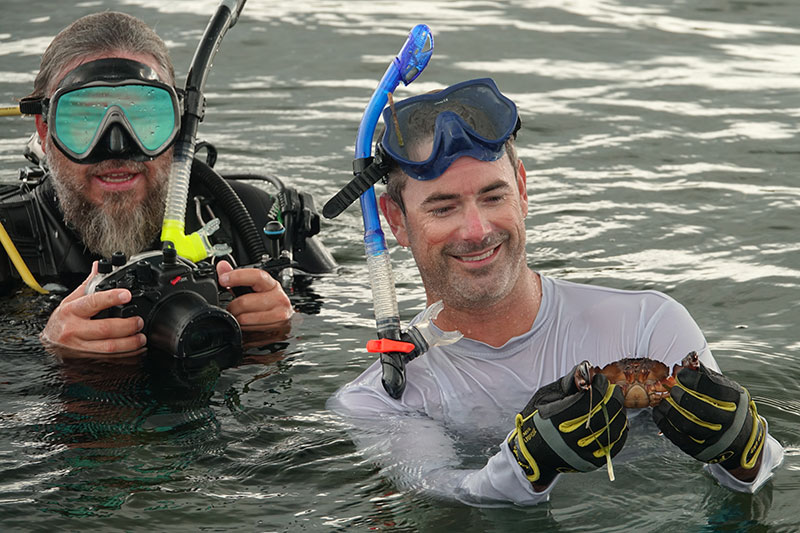 With no traps, harvesting stone crab claws can be a little intimidating. “You go to their home and you invade it,” says Buxton, describing the practice of reaching inside crab holes and pulling them out by hand. “I don’t know about that,” says Holeman.

Travis and Justin remain unconvinced until Buxton brings the first stone crab to the surface and demonstrates how to safely remove one of its claws. When done properly, the released crab survives with one claw while the harvested claw regenerates.

Leake dives in to conduct his own search and enjoys the solitude of the snorkeling experience. “It’s just you interacting with nature,” he says. Meanwhile, Travis opts to serve as underwater cameraman once he realizes that it won’t require him to poke his fingers where they don’t belong.

Afterwards (with all fingers intact), the captains pay a visit to the Man In The Sea Museum to learn the history of diving and the important role Panama City Beach plays as the home of all U. S. Navy diver training.