Having a strategy for your fishing trip is a good idea but, when nature doesn’t cooperate, it’s time to make some adjustments. That’s the challenge facing Capt. Travis Holeman and Capt. Justin Leake when a pod of hungry dolphins throws a wrench in their plans, in this episode of Chasin’ the Sun.

It’s a beautiful day on the Gulf of Mexico and conditions seem ripe for a productive day spent chasing king mackerel. Schools of baitfish and surface activity indicate kingfish are in the neighborhood, just outside the St. Andrews Pass, and it only takes a few seconds to get a hookup.

Suddenly, Leake and Holeman find the water teeming with dolphins intent on ambushing their catch. These friendly mammals have an uncanny ability to snatch fish off the line without getting hooked themselves and it’s not worth the frustration for our anglers to hang around for very long. 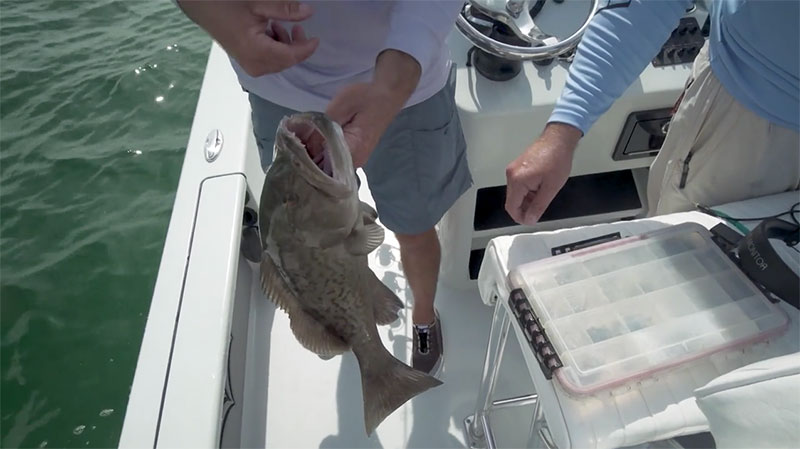 For Travis, that’s the beauty of letting conditions dictate tactics. “My favorite part about fishing is that the experience is different every single day,” he says.

Plan B calls for a stop above the wreck of the E. E. Simpson tugboat, located in 20 feet of water just a half mile offshore. Built in 1877, the tug sank in 1929 while attempting to assist a schooner that had run aground. For nearly 90 years, the wreck has been home to a variety of species and a productive spot for anglers.

Still rigged for kingfish, Justin and Travis instead luck into a horde of juvenile gag grouper in attack mode. It’s confirmation that when a plan goes awry, something even better can happen when fishing the waters off Panama City Beach.